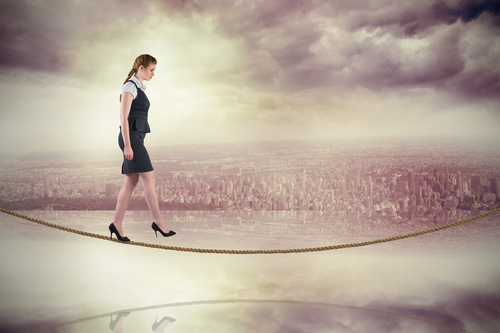 “But what am I going to do without my net?”

Rob looked bereft. He knew, intellectually, that he wasn’t entitled to his wife’s family’s money. He knew that he and Sheila were getting divorced — after all, they both had moved on and were seeing other people. Rob also knew that he was a grown, healthy man who had been working hard and making a living for many years. He had built his catering business from the ground up. The business had had good times and bad — now it was doing fine. But he had always depended on Sheila to help when it was hard to make payroll, or when large repairs came up suddenly. And she’d always come through.

Now, there it was, in black and white. He stared down at the 50-page Separation Agreement that I had drafted, shaking his head in disbelief. He kept his business, including all of its income and all of its debts.  She got the house.

Sheila was never going to bail him out any more.

Rationally, it made sense. But emotionally, well… sometimes the head and the heart move at two different speeds.

Sometimes agreements that sound logical and make sense in mediation — or in any kind of negotiation where you are considering the needs of many parties — just don’t look the same the next day.

How do you avoid this when you are negotiating your divorce?

It is hard to go from a family unit to supporting yourself. But know that you can depend on yourself. It WILL be okay somehow. You will make it okay. Be resourceful.

Count your blessings. Remind yourself of what you do have, of the love and support around you.

What will you do without a safety net? … Weave a new one!