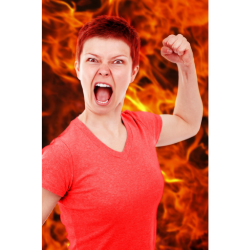 Did you ever get in an argument with someone that was so intense that you couldn’t see a way out?  Did you ever do things in a moment of rage that you regretted later? The emotions seem to take over.  I certainly have.  When I was young, I was hot-headed!  I’ve done things I am not proud of.

And I’ve seen it with clients, too.  In fact, one such incident was the reason I got interested in mediation.  About 16 years ago, I was working for Legal Aid, defending Brooklyn teenagers who had gotten arrested.  I went to see Daneisha in “the back” (which was the euphemism we used for the mini-jail within the courthouse).  She had been arrested for getting into a physical fight with another girl, and the allegations were terrible.  It looked like she had really been aggressive.  She could spend up to 6 years in secure detention.

“What was the fight about?” I asked.

“Miss Joy, that girl and I have been fighting so long I don’t even remember.  This has been going on for years.  Last time, she came after me with a baseball bat.  It’s just me that got caught this time.”

Things aren’t always what they seem!

“You’re doing time and you don’t even know what you were fighting about?” I asked, in utter confusion.

“The really crazy part about it, Miss Joy, is that we used to be good friends.  She was my best friend when we were really little.”

“This case should be mediated,” I said.  There was no clear bully or victim in this case – there were 2 girls who were caught in a cycle of violence that they couldn’t get out of.  Our juvenile justice system – with its binary right/wrong, good/bad punitive assumptions — was not doing right by these kids.  They needed skills and hope and opportunities and ways of managing their emotions.  They needed to be heard and to express themselves creatively.  They needed to learn constructive conflict resolution techniques, and to learn alternatives to violence.

But it is not just kids.  I see it in my practice, too.  People are often not at always their best when they are getting divorced!

The point is that it can happens to any of us – we can all get trapped in a cycle where we get so entrenched in a conflict with someone that it seems to take on a life of its own.  We even have a color for it – seeing red!

In her book, High Conflict: Why We Get Trappped and How to Get Out, Amanda Ripley defines this as a conflict trap: “A conflict that becomes magnetic, pulling people in despite their own best interests.  Characteristic of high conflict.”