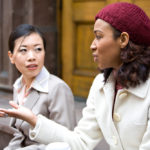 But how did you flunk the test? We studied together! I know you were prepared!” Katie and I were study buddies during our first semester in law school. I had no idea what to expect on the exam, and I had been worried. But Katie had been so confident. She and I had gone over all of the cases for our Constitutional Law class, which focused on the civil rights cases. She knew the facts, the holdings and reasoning that … read more »

The Oscar-nominated film, Marriage Story, by Noah Baumbach, is really a divorce story. It centers on the relationships between Nicole, an actor, her husband, Charlie, a Broadway director, and their eight-year-old son, Henry. The family lives together in Brooklyn until Nicole gets a job on a TV series in Los Angeles – and moves to LA with Henry. From Nicole’s perspective, she and Charlie had a deal that, someday, they would move to Los Angeles, which is where she grew … read more »

A few months ago, I had the pleasure of giving a Continuing Legal Education presentation on the Dignity Model with attorney-mediator colleagues Teresa Calabrese and Andrea Hirshman. Here is a clip from it, where I am talking about the concept that we ALWAYS have dignity — no one can take it away, no matter how badly they treat us. It is an important part of negotiation— you have to honor your own self-worth before you can honor that in others. … read more »