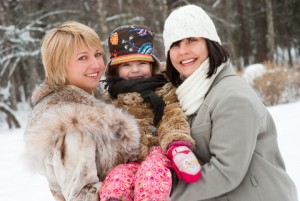 Lesbian couples often use anonymous or known sperm donors for one of the mothers to conceive. The non-biological mother is then known as the “second parent.” In a second-parent adoption, the biological parent retains her rights as birth mother of the child while consenting to the child’s adoption by her partner.

RLM has developed an expertise in second-parent, private-placement, and agency adoptions in New York.

When lesbian couples use known sperm donors (often friends), it is important to have a written and signed sperm donor agreement. The donor will usually agree to sign a surrender of parental rights so that the non-biological mother may adopt. But it is very important to clarify the expectations and legal relationships of all of the adults involved as early as possible. Will the donor have a right to see the child? Will he have any financial responsibilities? It is important that both sides consult with an attorney before signing such a document, so that they understand their rights and responsibilities. Joy understands the process and will be happy to guide you through the process.