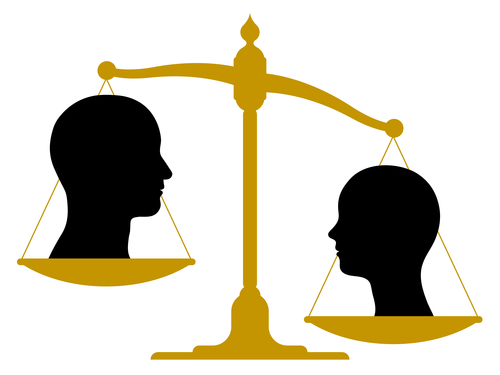 “What will you do about your implicit bias?” Jennifer asked me as she sat across the table. She, a woman of color, was in my office with her husband, a white man, for an introductory session to discuss using mediation as a process for their divorce. Hers was a fair question. And it was one I have never been asked before.

“Are you familiar with the concept?” she continued, apparently expecting me to say that I wasn’t.

“I was a Women’s Studies major in college and took a lot of courses in African American Studies, so yes, I understand the question,” I replied. “I want to answer you in two ways,” I continued. “First, in terms of my implicit bias as I move through the world, and second as it relates to neutrality in mediation.”

This is how I understand the concept of implicit bias: We live in a society that is filled with racist and sexist stereotypes, and we receive a constant barrage of messages that reflect those attitudes — in advertisements, in media, in all kinds of communications — overt and subliminal. For instance, the #metoo movement is exposing the deeply ingrained sexist and elitist assumptions of many men of power, both liberal and conservative. We see examples of racial bias every time there is a police shooting of an unarmed black man or child — the police almost always get off because it is found that it was reasonable for them to believe, in that situation, that the victim was about to do them harm. We constantly receive the message that people who don’t look white — are “other” — and are therefore foreign, dangerous, threatening or somehow inferior. These messages seep into our unconscious, and affect our words and actions without our even knowing.

We cannot control the fact that we receive these messages. But we can control our response to them. It is our responsibility, I believe, to be aware that such messages exist, to recognize them and to resist them. It is also our responsibility to notice our own stereotypes, and our own biases. And we all have them. I do not believe that anyone is really “colorblind.” I certainly am not. We are all influenced by the society we live in.

“I try to catch myself when I find myself being biased,” I told Jennifer. “I call myself on it several times a day. And I am lucky to have people around me who will also call me on it when they see that I am being biased. But it is a constant lesson.”

“I also want to answer you in terms of mediation, because I think you might be wanting to know whether I will value your voice in this room. I will do my best. I don’t think of myself as some objective outsider,” I explained. “My view of neutrality is that I really want to understand what you are saying,” I said, looking at her, “and I really want to understand what you are saying,” I went on, looking at her husband. “You know, they talk about the self and the other. When I find myself thinking of someone as ‘the other,’ I try, to borrow a phrase, to ‘lean in.’ I work harder to try to understand where that person is coming from. It is called Understanding-Based Mediation. I am glad you asked the question, and I ask you, if you decide to work with me, to let me know if you think I am showing implicit bias. I certainly do not mean to.”

I think Jennifer really wanted to know if I would listen to her, if I would be able to hear her — at least as well as I could understand her husband. I would certainly want to know the same thing if I were in her shoes. After all, isn’t that what we all want, particularly when we are in conflict — to be heard and understood, and recognized for who we are?

By submitting this form, you are granting: Rosenthal Law & Mediation, 225 Broadway ~ Suite 2605, New York, NY, 10007, permission to email you. You may unsubscribe via the link found at the bottom of every email. (See our Email Privacy Policy (http://constantcontact.com/legal/privacy-statement) for details.) Emails are serviced by Constant Contact.